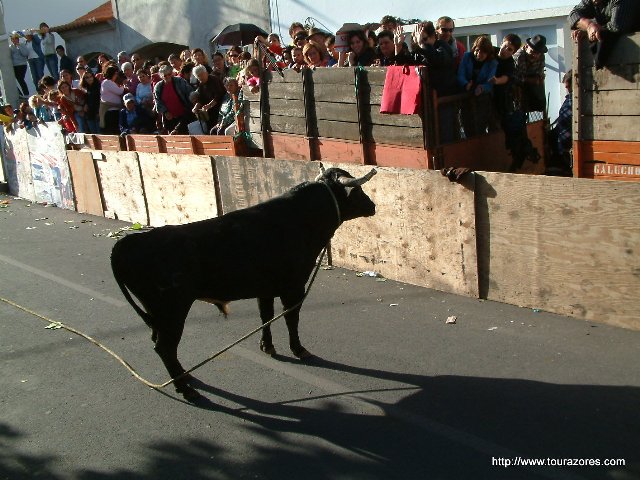 that you will have on the island of Terceira.  From May until October you will find bullfights in the street, in the fields, and even at the beach.  While the island of Terceira has the formal Portuguese bullfight, where there are “Cavaleiros” (Horsemen), “Toureiro” (Bullfighters) and “Forcados”  in a bullfighting ring,  the Tourada à Corda is less formal, in that it gives the spectator the opportunity to be on the same playing field of the bull.

Bullfighting in the Street 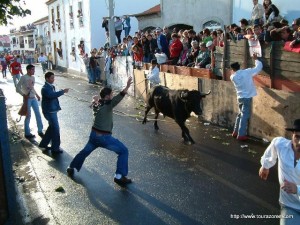 The Tourada à Corda happens in the late afternoon, when the work day is done for most.  Those who wish to spectate, take there place in high grounds, whether it is behind make shift barricades, up in trees, or on the verandahs of there homes.  While those brave enough, congregate in the street awaiting the release of the bull.   The bulls are brought in by crate and released one bull at a time with the rope attached.  The bulls are handled by the “pastores” (Herdsmen), to ensure the safety of the 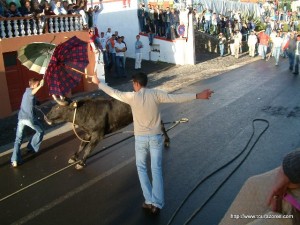 spectators as well as the bulls themselves.  Depending on the stamina,the bull is let loose in the streets for a period of about thirty minutes or more.  Wannabe bullfighters try to get the attention of the bull by flailing there arms, umbrellas or capes, in hopes that the bull chases after them.  Once the bull begins to charge the wannabe bullfighters run for there lives, to higher grounds, or behind the barricades, a cat and mouse type chase.  Once the bull is tired of the chase the pastores bring it back into its crate and then release the next bull.  This will continue until all the bulls have been released, with the last bull being the wildest.